To install the Preview plugin, you can go about it in the following ways:

If you run into trouble, don't hesitate to ask the friendly folk at the Notepad++ community for help. They might answer more quickly than me...

While the Preview plugin is now listed in the Plugin Admin as of Notepad++ version 7.6.6, that has a bug which causes the download to fail without any error message. I’ve submitted a workaround, but that won't be implemented before version 7.6.7.

For now, the only way is (still) to install it manually.

To find out where your %AppData% is located, just paste (or type) it into the address bar of Windows’ File Explorer: 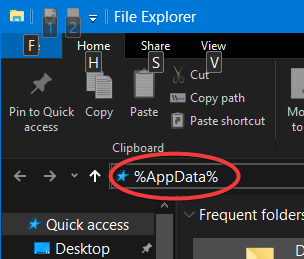 See How to use.